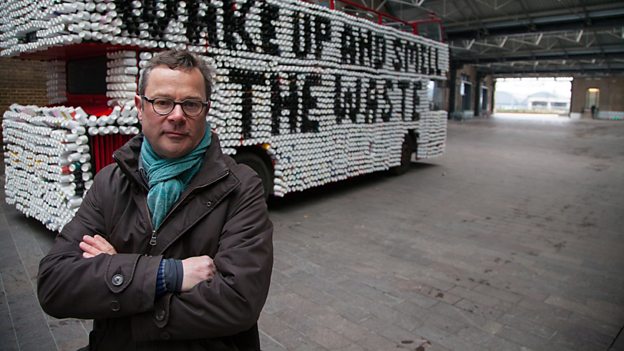 After realising that the UK are throwing away a shocking 2.5 billion cardboard coffee cups every year, campaigner Hugh Fearnley-Whittingstall declared a ‘War on Waste’ in a BBC One Documentary.

Despite the fact that some of the major coffee chains were initially reluctant to acknowledge the issue, Hugh managed to send the message viral after taking to the streets in a coffee cup covered bus emblazoned with the message “Wake Up and Smell the Waste.”

The Frugal Cup, which has attracted interest from coffee giant Starbucks, featured on the program which aimed to raise awareness of the waste crisis.

While only 1 in 400 disposable coffee cups is currently recycled, half of consumers believe that they are recycled all or most of the time.

Martin Myerscough, Frugalpac’s founder said: “We’ve been talking about it for years but the coffee chains told us customers weren’t interested. Now that Hugh Fearnley-Whittingstall has spoken out about it shows just how much the consumer were unaware on the issue.”

“It’s great to see Hugh’s campaign has had such an effect and that there’s now a real commitment across the industry to tackle this problem. People were shocked to learn that existing paper cups are only used once and rarely get recycled.

“We’ve spent the last two years developing our cup and we hope now that coffee chains and cup producers will see Frugalpac as an answer to this issue.”

Coffee giant Starbucks, which was among more than 30 signatories, will be testing the Frugal Cup ahead of a possible trial. The firm said: “We are very interested in finding out more about the Frugalpac cup and we will be testing it to see if it meets our standards for safety and quality with a view to trailing its recyclability.”